A quick return of experience on Google App Engine 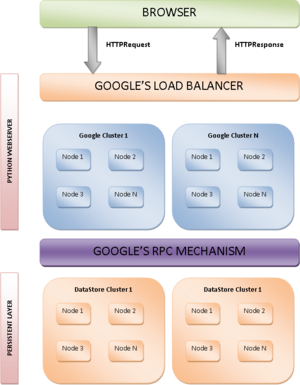 Offers on cloud computing are growing faster nowadays. In this article, I propose to have a look on Google with its Google App Engine platform (GAE) that I had the opportunity to use recently.

GAE was first released in April 2008 and is based on a Python web-server. The offer consists of
an out-of-the-box application platform including a development kit, an application server, a non-relational data store as well as a huge bunch of web-services that can be used freely or through a pay-per-use scheme.

I tried Google App Engine with Java recently and was quite satisfied with the whole ecosystem. In order to access to the database, I also add the ORM Objectify that greatly accelerated my development.
I particularly liked the integration with Eclipse, which is the Java IDE that I use. The data store use was a bit weird for me as the beginning and I had to change my relational schemes way-of-thinking.

The only point I may raised would concern the migration of the hosting of the application from the GAE environment to an other one (for instance not submitted to Patriot Act). But this will be another story...

7 iPhone rumours to prepare you for Apple's Sept. 10 announcement

Fingerprint sensor would be really a breakthrough.

A new strategy for Microsoft?

We just heard about Steve Ballmer leaving that Microsoft announces the acquisition of Nokia. What may be considered as a good opportunity for these two companies reveals a strong change in Microsoft strategy for mobile web market.

Taking aside the painful experience of Surface tablet, Microsoft have never been considered (yes "considered" - just have a look at the secret history of Microsoft hardware - to see their hardware realizations beyond mices and keyboards) as a pure player in hardware. But it was at least not a fully vertically integrated one.
On its side, Apple, with a converging OS for Mac, iPod, iPhone and iPad proposed a fully integrated (locked) vision to its end-users from years now. One like it or not, but such is the proposal.
Google, which once was its is a full software provider is now selling tablets, smartphones... on an integrated (but open) schema.

So times are changing and Apple vision of a vertically integrated model providing services to end-users through a cloud model seems to be promising.
Google understood some months ago and is clearly in first position. Apple stays on its positions but loses drastically market shares as the time goes by. Microsoft, on its turn, is changing its mind and strategy, acquiring one of the most experienced company in mobile phone devices. Won't it be to late?

A watch, a TV set, or new glasses. What would you prefer for Christmas?

This is clearly the point, who will present the most innovative device for next year?

- Samsung with its "Galaxy gear", to be unveiled on the 4th of September,

- Google with its "Glass" - currently under experiment by chosen users - that may be released for end of 2013.

Anyway, whoever will be the great winner of next months, the technological race has never been so interesting, and innovation is at its climax.

On my point of view, connected watch (whatever you call them, SmartWatch, iWatch or Galaxy gear) do not make the "Whaoooo" effect that I had some years before with the iPod touch, but I may be wrong. Especially if manufacturers manage to make them an essential device for end-users as they did it with smartphones (by the way, will we need smartphones in 2 or 3 years if we all have connected watches ?).

Connected TV sets may certainly be improved, but the concept is already there and could then not be such a disruptive innovation (here again, I may be wrong...).

But what about this smart glasses? Here is the best product I can see in the next months. It is mainly presented today as an embedded video device. But what a great potential if you mix Internet information with it !

So, what would be in your own letter to Santa?